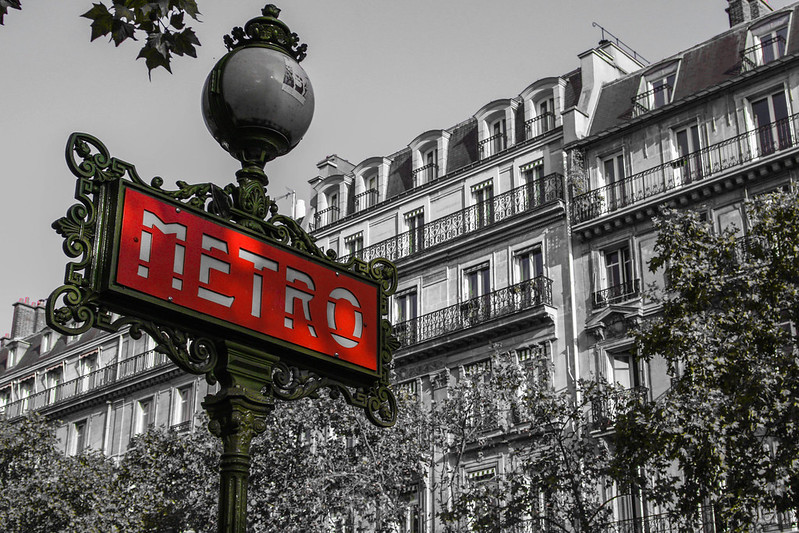 For as long as I can remember I have had a fear of getting lost. At five years old while on vacation I was briefly separated from my family in a department store. My mother says the experience left me quite traumatized. This could explain my obsession with directions and my heightened sense of awareness when visiting new places. I don’t want to find myself lost in a rack of women’s outerwear again.

I am an obsessive planner so while preparing for my first visit to France I spent hours studying the Paris Metro system mapping out our commutes from our AirBnB to all the attractions and determining our transportation budget. (I know it’s a bit over the top).

All the planning in the world could not have prepared me for my Metro experience. I was amazed by the beauty and character of many stations, some of which can be considered tourist attractions in themselves

As early as 1845 Paris government, its citizens, and the existing rail companies recognized the need to better link the inner districts of the city. The railways and French government wanted to expand the existing rail system to bring people into the city from the suburbs. The Municipality of Paris wanted an underground system that would serve only the city’s twenty arrondissements. This debate went on for close to 50 years without resolution. In 1898 with the population of Paris at 2.1 million, congestion becoming unbearable, and the high cost of land for rights-of-way, the Municipality finally won, and an underground rail system of six lines with sixty-five kilometers of track was to be built

Line 1 was one of the first lines of the Metro to open in 1900. One of the stops on the line was the Louvre station, named for the iconic museum. Now named the Louvre-Rivoli station it was the first to be decorated to promote French culture at the encouragement of then culture minister Andre Malraux in 1968. Today replicas of ancient sculptures and statues from the Louvre adorn the platform while monitors continuously loop videos of the museum’s countless treasures.

Another Line 1 must-see station is Bastille. France is rich with a history of protest and revolution, none more famous than the storming of the Bastille. In 1989, to celebrate the bicentennial of the French Revolution and to recognize those whose bravery lead France from a monarchy to a republic, the subway tiled walls were decorated with murals of revolutionary scenes that pay homage to the events and people of that time. The platform of line 5 of the Bastille station contains archeological remains of the former prison.

One of my favorites is the Arts and Metiers station servicing lines 3 and 11. Upon entering the line 11 platform the striking copper-lined walls immediately transport you hundreds of feet under the ocean on a subterranean adventure. Child-like curiosity hits and you are drawn to look through the numerous portholes along the platform, each containing scenes of fantasy and invention. The station was remodeled in 1994 and is based on the writings of poet and playwright Jules Verne, of course! Giant cogs suspended from the ceiling celebrate the “steampunk” style. It is a fantastic warm-up to the nearby Arts and Metiers museum at street level. Good luck getting your children out of this station!

Not all Metro treasures lie beneath the streets though. Architect Hector Guimard was commissioned by the Paris Metropolitan Railway Company in advance of the 1900 World’s Fair to design aesthetically pleasing entrances for the new public transit system. Some consider Guimard to be the pioneer of the Art Nouveau movement and it was in this style that he based his creations. The awning of his “edicule” (kiosk) entrance was inspired by the wings of a dragonfly. Only two of these entrances are left today. They can be found at the Porte Dauphine (line 2) and the Abbesses (line 12) stations. His other entrance “entourage” (enclosure) is more prevalent throughout the city. It features two sinous lamp posts topped with a red orb shaped lamps joined by an arc. Some of Guimard’s more elaborate entrances were not well received by the public and were demolished over time. Fortunately the eighty-six Guimard designed  entrances that remain are now protected as historical monuments

I’ve touched on only a few stations but there are many more throughout the city that offer insight into Parisian culture and history. There is even a station that celebrates the history of the potato. I have to see that one! For our next trip to Paris I vow to spend less time obsessing on navigation and more time enjoying the treasures the Metro has to offer. Just keep me away from department stores.

The Blue Prince of Montmartre