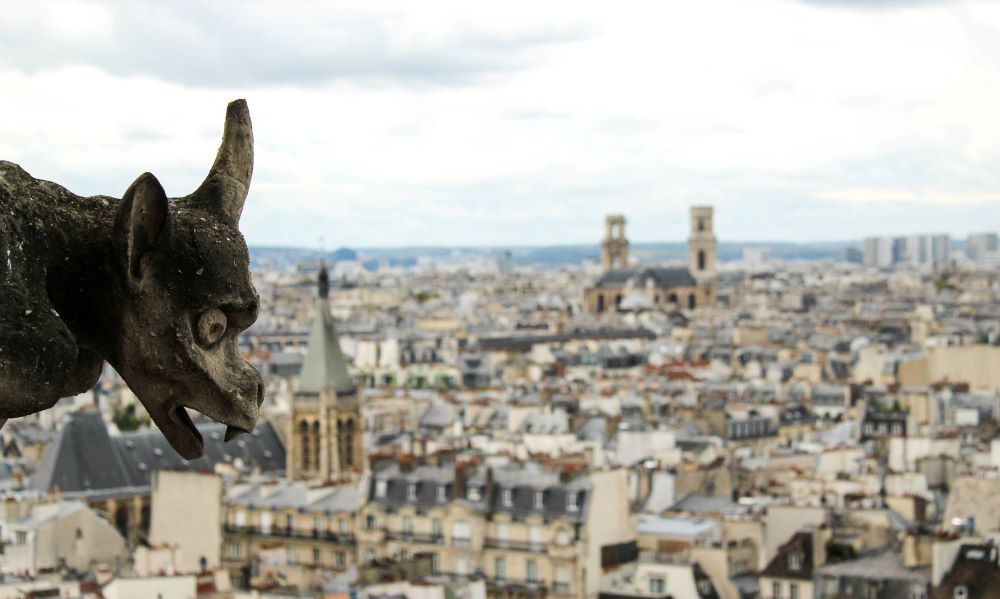 Photo by KaLisa Veer on Unsplash

Notre Dame. Sigh. One of the worst events in recent memory that didn’t involve some sort of human tragedy. I was fortunate enough to have visited this priceless monument and took the time to attend a mass. The Gregorian chants! The flying buttresses! Even Therese of Lisieux, my favorite saint, has a presence there. She stands in marble, her rose covered cross clutched to her chest, inviting you to pray.

I obviously adore this iconic cathedral. And yet here’s a picture of me taken in front of the altar in 2009 looking as if someone died. My cousin sent me this while the spire burned. I didn’t even know this picture existed. Surely I was ecstatic to be in Paris. What was going on here? Did I have some sort of inkling? Odd.

I remember when the news broke on CNN, and watching with horror. Along with the rest of the world. I had errands to run that day and kept an eye on it through my phone. I expressed my dismay to anyone who would listen-receptionists, store clerks, gas station attendants. I wasn’t sure if they knew or cared, but all joined me in my shock and grief.

Ken Follett, who wrote Pillars of the Earth, a famous novel about medieval cathedral builders, released a book after the fire. He notes:

Notre-Dame had always seemed eternal, and the medieval builders certainly thought it would last until the Day of Judgment; but suddenly we saw that it could be destroyed. In the life of every boy there is a painful moment when he realizes that his father is not all-powerful and invulnerable. The old man has weaknesses, he may become ill, and one day he will die. The fall of the spire made me think of that moment.

President Macron, embroiled in bitter disputes with his populace over reforms, spoke to the cameras on that day, vowing “Nous rebattirons,” we will rebuild. I took comfort in that.

The rebuild has not been without controversy. Apparently not everyone is of the same mind when it comes to the restoration. Shortly after the fire the Prime Minister, Edouard Philippe, announced a contest for the design of the spire. However, the chief architect, Philippe Villenevue, is in favor of building a spire identical to the 800 year old one that was lost. General Jean-Louis Georgelin, chosen by Macron to lead the effort, invited Villenevue to “shut his trap.” The final design should be approved in mid-2021. (Source, ABC News, 11/14/19.)

Despite these plans, the fate of the monument is uncertain. The chief architect says he’s concerned about the vaults in the ceiling.

“If we remove the burned wood and the pieces of the framing that burned, and the metal elements that accumulated since April 15th, we don’t know what will happen. So today we absolutely cannot say that Notre Dame has been saved.”

The next time we’re in Paris we will visit the Sacre Cour and say a prayer. Saint Therese beckons from there too.

Ken Follett’s book, Notre Dame, is available on Amazon with the proceeds going to the preservation of ancient French monuments.

*****If you have enjoyed this essay please subscribe to our page through the link below (mobile) or on the right sidebar (desktop). We maintain strict privacy and do not share emails or any other information.