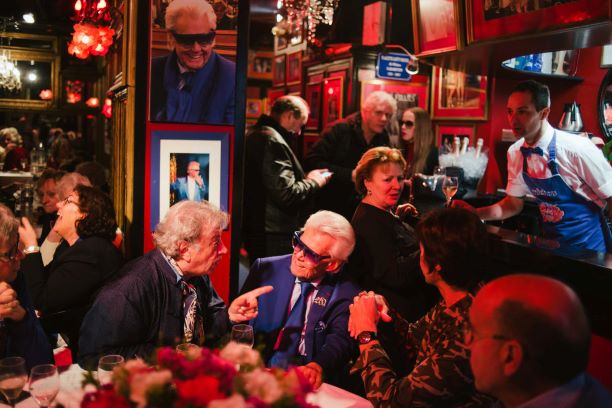 On January 26, 2020 a man called Michou, the Blue Prince of Montmarte, died in Paris. People there were distraught. “Paris is an orphan now,” some were saying. Who was this monumental figure that caused the soul of the City of Light to darken? Curious, I decided to research it further. And when I learned who this colorful character was, the outpouring made so much sense.

Michou created the original drag cabaret in 1956 at his nightclub in Montmartre. He was the inspiration behind the 1978 French comedy La Cage aux Folles which was remade into the film, The Birdcage, starring Robin Williams and Nathan Lane. Anyone who has spent even a small amount of time in this subculture will understand the loss. Drag cabaret is pure hilarity. Fun.

Michou had a thing for blue. He only wore blue outfits and chunky dark glasses. His Montmartre apartment overlooking Sacre Couer was decked out in blue -he even had a turquoise toilet seat. He was buried in a blue coffin in St. Vincent Cemetery in Montmartre in a blue tomb.

He was born Michael Alfred Catty in 1931. In 1948, he arrived in Paris from Amiens, having disclosed to his mother that he was attracted to men. She told him, “If you’re happy, that’s all that matters.” With that note of confidence he went to Paris and conquered it, first working at a café on the rue de Martyrs before opening his own club at the foot of the Montmartre.

One night in 1956 during Mardi Gras, he dared his male friends to dress up as famous women for after dinner entertainment. “I imitated Brigitte Bardot,” Michou said. “Finishing my number almost naked. For the times, if was very cheeky.”

The entertainment was such a hit Michou continued it with his camped up “Michettes.” They became icons of Paris nightlife alongside the Moulin Rouge and the Crazy Horse. Egyptian born 1970s pop queen, Dalida, loved to go and see herself being portrayed. “We do not ape them,” said Michou, “There is never any vulgarity.”

Michou presided over this magical place and reportedly drank two bottles of champagne from blue crystal glasses everyday instead of hydrating himself with water. Famous friends, such as Bernadette Chirac, admonished him about this. Said Michou, “I don’t do drugs, I don’t smoke. At least give me the pleasure of champagne!”

Visitors to his club, Cabaret Michou, were often treated to one liners like, “If the meat is good tonight, it’s because I slept with the butcher.” It’s these gems that are a main draw for a place like this. His parties were star studded. He counted Brigitte Macron, Liza Minelli and Sophia Loren among his friends to name only a few.

Michou, in remission from colon cancer, died of a pulmonary embolism at the age of 88. Says biographer Francois Soustre, “As an openly gay performer, he helped open doors and liberate others. And he started from nothing.” He is survived by his longtime companion, Erwann Toularastel.

Had I known about this when we visited in Montmartre last September, we would have gone while he was still alive. Cabaret Michou remains open 7 days a week and is located at 80 rue des Martyrs in Paris.