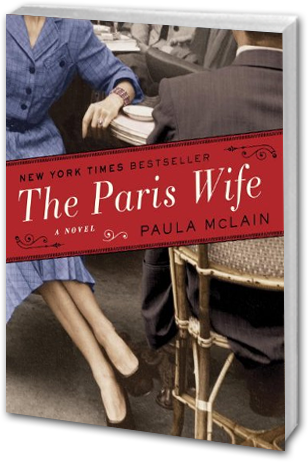 When the Husband is Just too Exhausting, Try The Paris Wife, by Paula McLain

The Paris Wife by Paula McLain is a novel and a love story of Ernest Hemingway and Hadley Richardson, his first wife; the wife during the Paris years. It is a story that most of us already know, from Hemingway’s Movable Feast, but told from a different, more feminine viewpoint. It was interesting reading the two books in concert and listening to husband and wife tell the same story from their individual perspectives.

The novel starts with twenty nine year old Hadley, a gifted musician who spent the majority of her life as a virtual shut in caring for her ill mother. With her cloistered background she seems ill-matched for the young Hemingway when he bursts into her life at a friend’s party and forever changes it. “He moved like light,” she says. “He never stopped moving or thinking or dreaming.”

Newly returned from the war, Hemingway is looking for safety, and Hadley an escape from the prison of her current existence. It is not so surprising then that these two otherwise dissimilar people fall in love and cling to each other. After a brief courtship the two marry and hastily relocate to Paris where all the talented young writers and artists of the day were gathering. Hemingway, who believes himself to be a towering- although as yet unknown talent- is determined to be where life is being lived in a new untethered and thrilling way. Hadley, being all consumed with her new husband and his grand dreams, would’ve happily followed him to the darkest part of the globe. Luckily it was Paris.

Once there, the two take up a bohemian existence surrounded by artists and writers. The reader is invited along as the Hemingways meet some of the 20th century’s most notable literary figures. The young couple live in a kind of genteel poverty; Hemingway spending his mornings writing in a cafe, while Hadley is stuck at the chilly apartment over the dance hall, with a reeking toilet in the hall. But despite the hardships, the booze is plentiful and evenings are filled with “fat oysters and good talk.” Their new friends are always willing to pay for trips, nourish them with exquisite meals, and most importantly provide the fawning attention the young Hemingway so desperately needs.

It soon dawns on the couple that neither the glittery jazz fueled world of Paris in the 20s, nor the fast and utterly selfish company they keep, value traditional ideas of marriage and monogamy. Hadley, the traditionalist, “bets on marriage to be done gracefully and well.” But Hemingway, surrounded by beautiful women and always susceptible to an ego stroke, quickly becomes distracted by this new brand of sophisticated, modern, “gold plated” women. Hadley, with her stodgy values, thick physique and maternal instincts, could hardly compete, which she realizes early on. “I knew with absolute certainty that would even to try to hold him back would be a mistake.”

Paula McLain, a poet of considerable talent, uses her ample skill to evoke a Paris that is at once beautiful and heart breaking; filled with artists, teeming with life yet aching with loneliness and sadness. In her Paris, for which there is no cure, even “the bridges seemed to want to break your heart.” The author’s artistry saves this novel from being just another biography of Hemingway’s early years. The reader feels that McLain truly loves her subjects. They pulse with life and breathe on the page for her.

She makes Hemingway a rounder, more complete, and complex person than the macho and often exhausting image he presents to the world. In her hands, he is a sympathetic character, and in the end when the inevitable betrayal occurs, we feel for him; for them, and their marriage, which perhaps was doomed from the second they first set foot in Paris, or even before. Because after all, as Hemingway puts it, “Isn’t love a beautiful, god damned liar?”

Four Treats For You